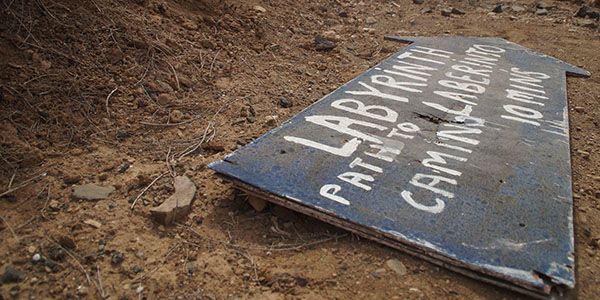 The Cotillo's labirint of Wolf Patton

Born 3 km far from Cotillo's west cost, in Fuerteventura (Canary Island) the maze of Wolf Patton.
Wolf was a musician. He was borned in Germany, after partecipating the International Conference of the Netherlands in 1999, he begun to build his labyrinth, made entirely of stone.

The labyrinths have a characteristic standard of dimensions and fixed in time. Generally most of the the characteristics Christians's labyrinths reproduce the shape of the cross.
Patton, however was influenced by gothic labyrinths, in particular to the labyrinth of Chartres Cathedral. It took more than two months to create the circular shape, with the "sun" in the center and 8 rays expanding outside.
The maze, with 3 km long circle takes about 40 minutes to make complete tour around it.
There is a well-defined logic when one just follows the path until reaches the exact center.
The most interesting question that many visitors have had, is about the link that the maze have with the human psyche.
In fact, when passing through it, both of the brain areas are activated. This happens because the maze is constructed voluntarily with the same number of turns to the right and left, just in order to activate and work equally left and right cerebral hemispheres.
Since the born the labyrinth symbolizes an inner journey through which the spirit can evolve and elevate to a higher level.
Art, in all its forms, has always stood for analyzing, with personal and subjective interpretations of the various concepts: Wolf Patton was able to fully express the reality of the language of the human psyche, the nature of the soul and the ambiguities of the unconscious.
In the labyrinth, the artist does not need the gaze of the world, the darkness is not the absence of light but something more tangible, palpable, is constantly experimenting, is awareness, revelation, in short, is the "irresistible truth" of  art.
In fact, once you reach the exit, the maze of Cotillo will not leave you indifferent.
The relaxing atmosphere, the fresh air, the sound of the waves and the sound of wind, will take you in this fantastic journey, rediscovering nature and yourself.

Check out our Fuerteventura Excursions service. Are you interested in more articles like Fuerteventura water park of property for sale in Fuerteventura, contact us for your video and your advertising!